RETRAM (as REcognition and TRAjectories of Meteors) is a group of amateurs making experiments around meteor detection and trajectory estimation using radio signals through passive radar techniques.

Goals for the RETRAM project – our wishes – are :

Some forewords of phenomenology… A meteor entering the atmosphere (~60 km/s) loses some of his matter (ablation) and heats surrounding air. This temperature increase along the trail and atmosphere becomes reflective for RF signals (plasma). RF transmissions coming from the ground are then scattered by both head and trail. This is shown in figure 1 below. 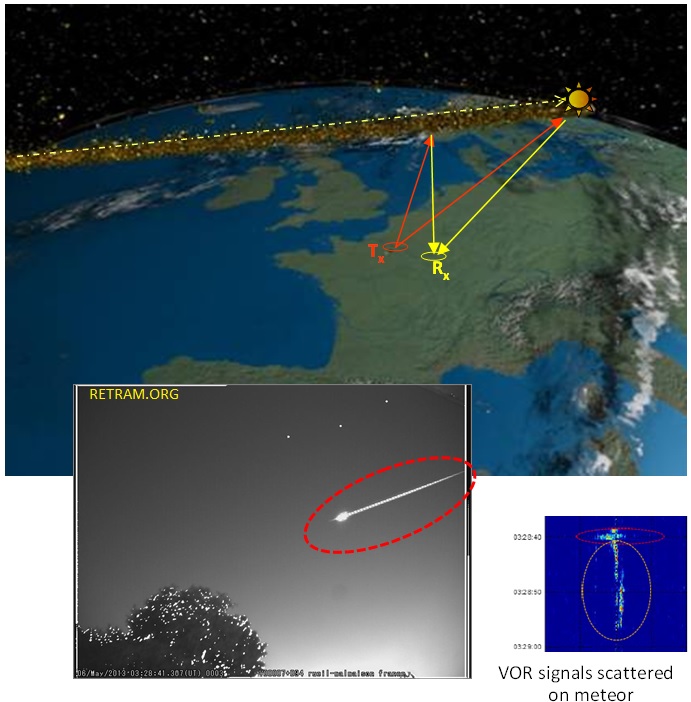 First lets consider the amount of energy scattered by the meteor to the receiver. The radar equation tells us:

The received power Pr is a function of the transmitted power, distances and a special term “sigma” function of the object. The different terms involved in this equation are :

Various studies have been conducted to estimate the most appropriate frequencies, that is to say those where the reflectivity of the meteor head or its trail is maximum. In fact, to detect the trail (the ionized atmosphere), frequencies in the 50 to 200 MHz are suitable. To detect the meteor head, the most relevant frequency depends on the meteor size… and it is difficult to know a-priori what will be the size of the next falling object.

We have seen that an electromagnetic wave reaching the meteor will be reflected back. We could then turn our antennas to the sky and transmit some signal and check if we have reflection. This would require permanent transmitting and this is maybe not the most appropriate… specially for amateur system.

Another option is to use existing broadcast systems like FM station, TV station, GSM or any ground-based, high power system in the frequency range of interest. This is the core idea of passive radar. These existing transmitters, originally on for other purposes, are called “transmitters of opportunity”. Of course, if they are turned off, no detection is possible…

First RETRAM trials used the GRAVES radar and VOR transmitters (see http://en.wikipedia.org/wiki/VHF_omnidirectional_range). This type of system is interesting because it radiates towards airliners, hence illuminates the sky, and the frequency range of VORs is 108 to 118 MHz, just above the FM broadcast.  Results with VOR showed detection was possible, some echoes were easily recorded using a simple setup and transmitters around Paris – France. But the structure of the signal was not suitable for position estimation. This was “RETRAM V1“. The following picture (fig 4) shows some echoes recorded during the 2013 Quadrantides shower (3rd December) on three VORs and the GRAVES radar (left). 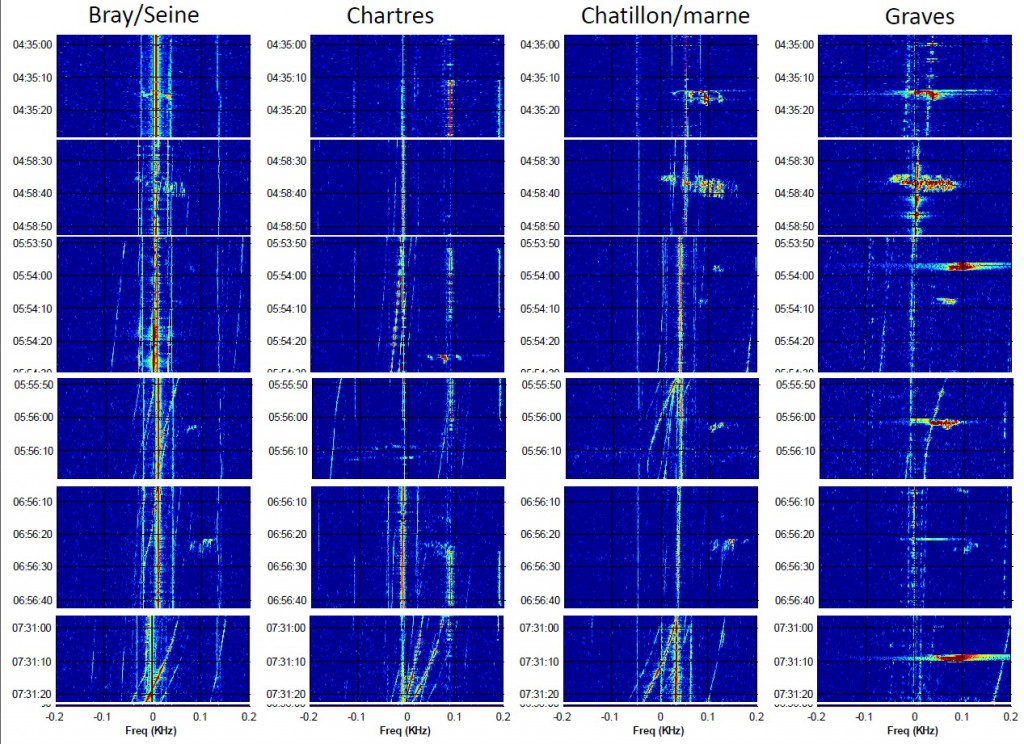 Figure 4 : VOR and GRAVES detection on the quadrantides shower – 2013

Another type of transmitter was then tried : FM broadcast, in the 88 to 108 MHz range. These signals have a completely different structure, as they carry stereo audio using frequency modulation, with a bandwidth of around 80 KHz. This led to much interesting results, enabling 3D position estimation and motion estimation. This is RETRAM V2.

Using FM to detect meteors is much more complex because the signal bandwidth is larger than the Doppler created by the meteor motion. Hence the ground receiver gets twice the signal : the direct path (as any FM radio receiver, direct signal from tower) and the reflected path on the meteor. These signals are mixed and only signal processing can separate correctly direct and echoed signals. This is explained in figure 5. 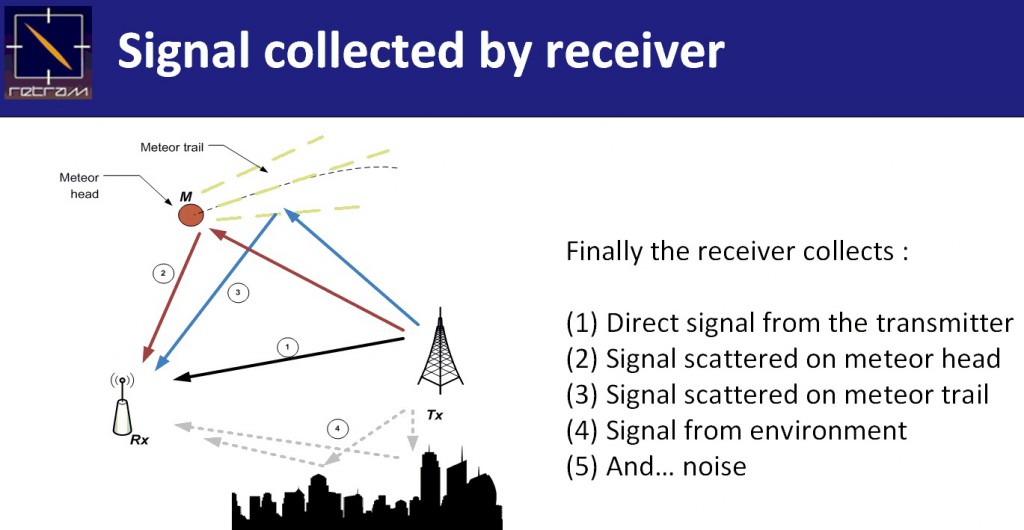 To be able to separate correctly the two signals, RETRAM uses two antennas and a real-time adaptive filtering technique. The idea is to have in the end one reference signal containing only the FM broadcast from the transmitter, and a second channel with only the reflected signal. Figure 6 below explains the main steps for this processing :

This processing is repeated over time and gives bistatic range and speed of the detected meteor. This bistatic range gives an ellipse of possible positions for the meteors, but possible location can be found by using multiple transmitters, multiple receivers as in figure 7. 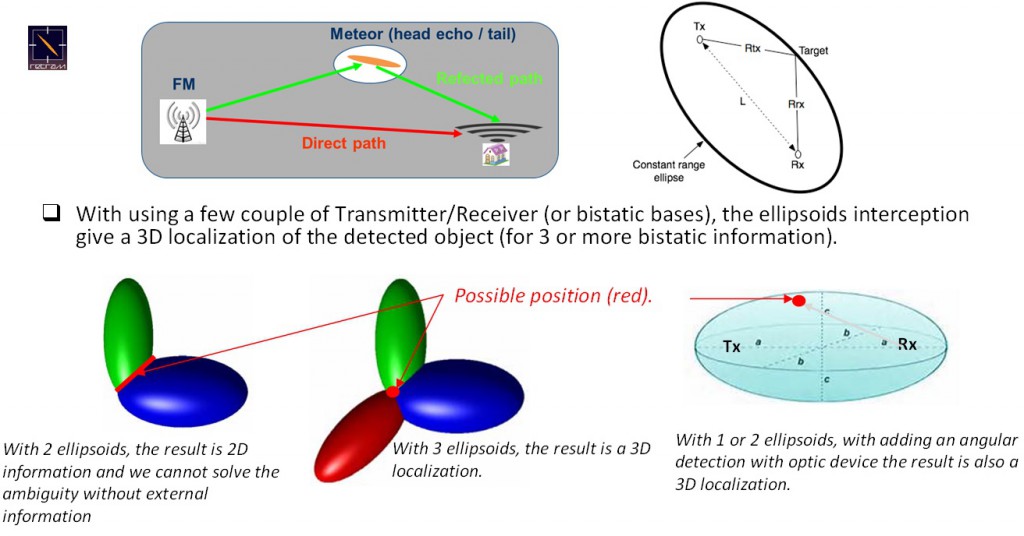 Finally this technique opens the road to very accurate and long-range detections, as for example in the following figures. 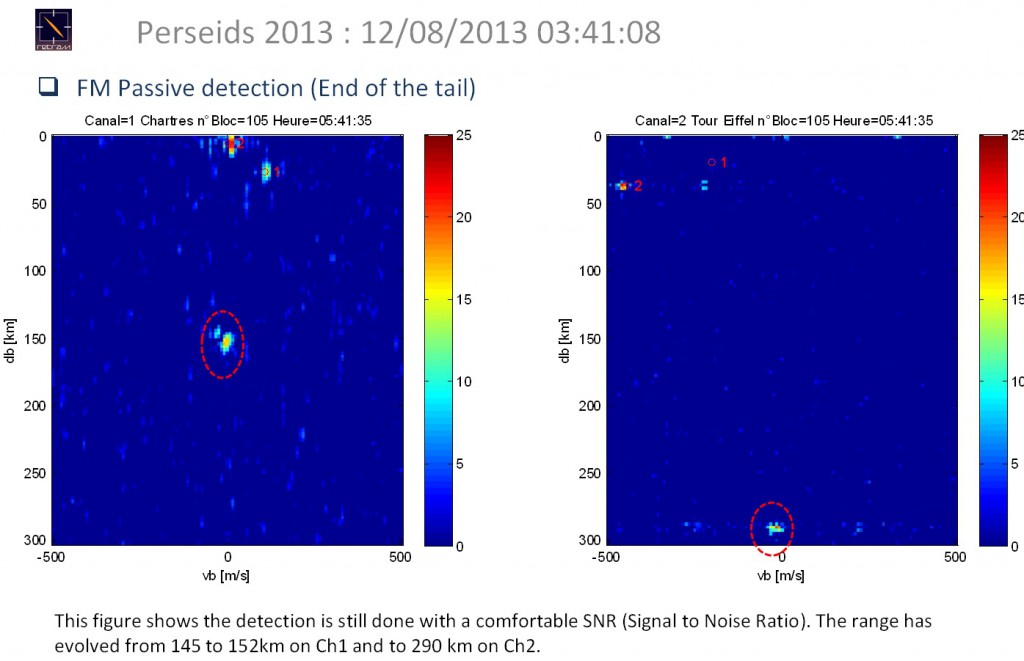 For more details on the algorithms and techniques used by RETRAM 1 and 2 refer to the publication list or to the posts.